Many organizations include the assessment of fraud risk as a component of the overall SOX risk assessment and Compliance plays a vital role.

The word SOX comes from the names of Senator Paul Sarbanes and Representative Michael G. Oxley who wrote this bill in response to several high-profile corporate scandals like Enron, WorldCom, and Tyco in United Station. The United States Congress passed the Sarbanes Oxley Act in 2002 and established rules to protect the public from the corporates, doing any fraudulent or following invalid practices. Primary objective was to increase transparency in the financial reporting by corporations and initialize a formalized system of checks and balances. Implementing SOX security controls help to protect the company from data theft by insider threat and cyberattack. SOX act is applicable to all publicly traded companies in the United States as well as wholly owned subsidiaries and foreign companies that are publicly traded.

Compliance is essential for an organization to avoid malpractices in their day to day business operations, during these unprecedented times of challenge change such as what we are experiencing today. There are a lot of changes in the way we do business during the times of COVID. Workplaces have been replaced by home offices due to which there are challenges to enforce Compliance resulting in an increased risk of fraud.

Given the current COVID-19 situation while many employees are working from home or remote areas, there is an increased challenge of managing resources or time. Being relevant to the topic, on user provisioning, there are risks like, identification of unauthorized access to the system for individual users based on the roles or responsibility.

And so on, based on the policy requirement and finally the IT providing an access grant. Several organizations have been still following a manual process, thereby causing a security risk.

The traditional way of processing a user provisioning request, especially during the time of COVID-19 has become complicated. This is due to shortage of resources or lack of resource availability to resolve a task. Various reasons are:

In such a situation automation plays an important role. Automation has helped in reduction of manual work, labor cost, dependency/ reliance of resource and time management. An automation process built with proper design, tools, and security reduces the risk of material misstatement, unauthorized access, fraudulent activity, and time management. Usage of ServiceNow has also helped in tracking and archiving of evidence (evidence repository) essential for Compliance. Effective Compliance results in better business performance.


Intelligent Automation for SOX Compliance can bring in significant benefits like agility, better quality and proactive Compliance. The below table provides further details on the IT general controls.

The table provides a detailed comparison of the manual and automated approach. Automation can bring in 40-50% cost, reliability, and efficiency gains. The maturity model requires a three step process of standardization, tools adoption and process automation.

For more details or enquires, please write to marketing@relevancelab.com

ServiceNow offers a fantastic platform for developing applications. All infrastructure, security, application management and scaling etc.is taken up by ServiceNow and the application developers can concentrate on their core competencies within their application domain. However, several challenges are faced by companies that are trying to develop applications on ServiceNow and distribute them to multiple customers. In this article, we take a look at some of the challenges and solutions to those challenges.

A typical ServiceNow customization or application is distributed with several of the following elements:

Distribution of an application is typically done via an Update Set which captures all the delta changes on top of a wel-known baseline. This base-line could be the base version of a specific ServiceNow release (like Orlando or Madrid) plus a specific patch level for that release. To understand the intricacies of distributing an application we have to first understand the concept of a Global application versus a scoped application.

Scoped applications, which are now the default, are uniquely identified along with their associated artifacts with a namespace identifier. No other application can access the data, configuration records, or the API unless specifically allowed by the application administrator.

While distributing applications, it is easy to do so using update sets if the application has a private scope since there are no challenges with global data dependencies.

The second challenge is with customizations done after distributing an application. There are two possible scenarios.

These two problems can be solved by using versioning control using Git. When the application developers want to accept blue button changes into 2.0 release they can use the Git merge feature to merge the commit of Blue button changes from customer-1 repo into their own repo.

The ServiceNow source control integration allows application developers to integrate with a GIT repository to save and manage multiple versions of an application from a non-production instance.

Using the best practices of DevOps and Version Control with Git it is much easier to deliver software applications to multiple customers while dealing with the complexities of customized versions. To know more about ServiceNow application best practices and DevOps feel free to contact: marketing@relevancelab.com

How to make your BOTs intelligent

Stories are quite very compelling and a way of life. All of us need a story to believe in and with no exception to the CXO’s of the tech and enterprise giants. They need a reason to believe that Digital Transformation can be frictionless with the choice of right platforms and partners.

With growing interest & investments in new concepts like Automation and Artificial Intelligence, the common dilemma for enterprises is how to scale these for significant impacts to their relevant context. It is easy to do a small proof of concept but much harder to make broader impacts across the landscape of Hybrid Infrastructure, Applications and Service Delivery models. Even more complex is Organizational Change Management for underlying processes, culture and “Way of Working”. There is no “Silver bullet” or “cookie-cutter” approach that can give radical changes but it requires an investment in a roadmap of changes across People, Process and Technology. 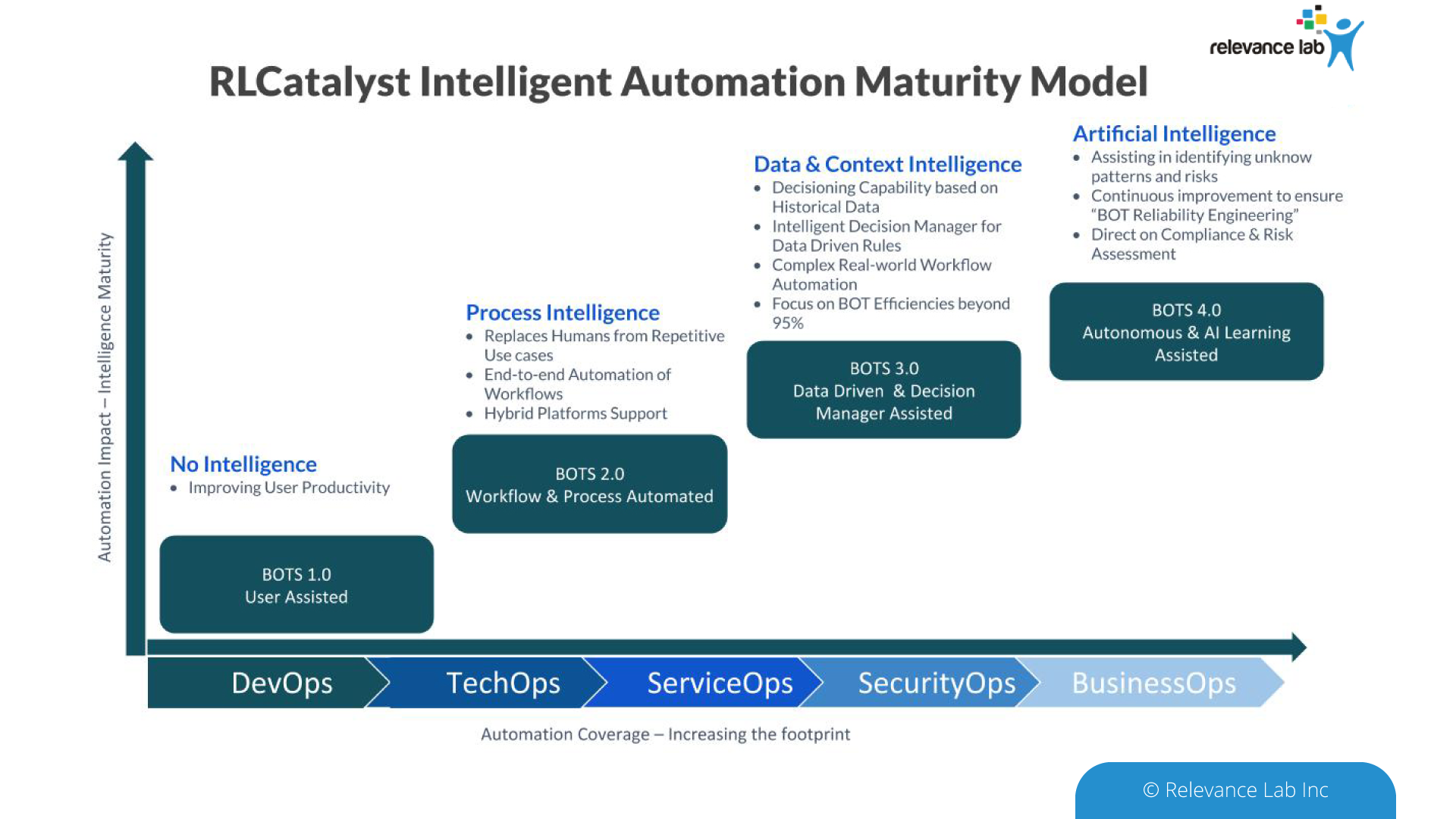 AUTOMATION is the core functionality including:

RLCatalyst provides solutions for enterprises to create their version of an Open Architecture based AIOps Platform that can integrate with their existing landscape and provide a roadmap for maturity.